In March of 2022, PHDC, on behalf of the Philadelphia Redevelopment Authority (PRA), released the Lower Eastwick Hydrologic and Hydraulic Study prepared by AKRF, supported by the US Environmental Protection Agency (EPA) and the City of Philadelphia’s Office of Sustainability.

PHDC and the City’s Office of Sustainability continue to work with the residents of Eastwick to find solutions to address the critical effects of flooding in the area. If you are a resident of Eastwick, please join representatives and leadership from the City of Philadelphia on May 5 at 6pm for a virtual meeting to discuss ongoing efforts to address flooding and quality of life in Eastwick, Philadelphia. You must register in advance for this meeting. Please visit: https://us02web.zoom.us/meeting/register/tZMlcuqtrDIoGdTtjmWw6K08c_13S67XKC1s to register. All registered participants will receive a link and a reminder for the meeting.

Click on an image below to view the report. 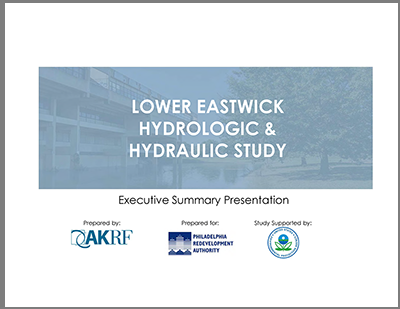 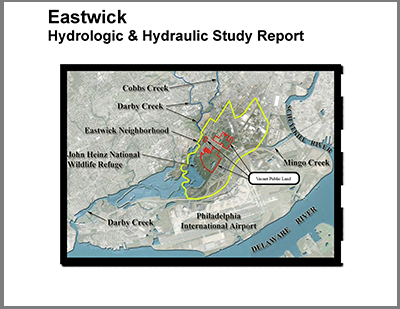 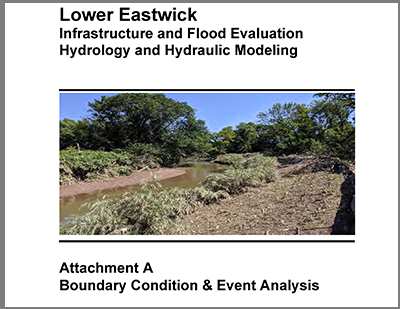 On August 17, 2020, Mayor Jim Kenney, Councilman Kenyatta Johnson, PHDC and other city, state, and community partners and officials hosted a virtual town hall to address the recent flooding in Eastwick and hear residents concerns. Over 170 persons participated, and more than 100 questions were answered live or in a chat/Q&A feature. Below are all the answers posted in the chat and the Q&A. The meeting was recorded, and can be reviewed.

PHDC Response to Tropical Storm Isais and the Eastwick Community

August 5, 2020
Tropical Storm Isaias affected many residents in Philadelphia and hit the Eastwick community very hard. Sadly, this kind of flooding is nothing new to the residents of certain sections of Eastwick who have experienced serious flooding through storm after storm, decade after decade.

PHDC and the City recently completed a two-year planning and community engagement process that involved hundreds of local residents, in order to guide the reuse of nearly 200 acres of publicly-owned land in Eastwick. This process included our partner public agencies and was guided by a Steering Committee that included several neighborhood residents and business representatives.

The plan that came out of that process, the Lower Eastwick Public Land Strategy, has as one of its primary goals “Above all, Alleviate Flooding Concerns.” Eastwick has a long history of being prone to flooding events, due to its low-lying elevation and proximity to several bodies of water that overflow their banks during storms.

The City is committed to finding ways to reduce flooding in Eastwick through green stormwater infrastructure built on this publicly owned land. The Land Strategy recommends that 67% of the publicly-owned land in Eastwick be permanently dedicated to green infrastructure, stormwater mitigation, and community open space. We are in the process of implementing that plan.

PHDC has two Environmental engineering consultants currently gathering and analyzing data to help inform how to achieve a sustainable future for these public lands for the long term. We are working to complete these additional studies as quickly as possible.

PHDC and the City of Philadelphia are committed to ensuring that the publicly owned land in Eastwick will ultimately contribute to a positive, long-term solution for the community, and to working closely with community stakeholders to ensure that they are engaged and informed throughout the process.
Gregory Heller
Senior Vice President of Community Investment, PHDC
Executive Director, Philadelphia Redevelopment Authority 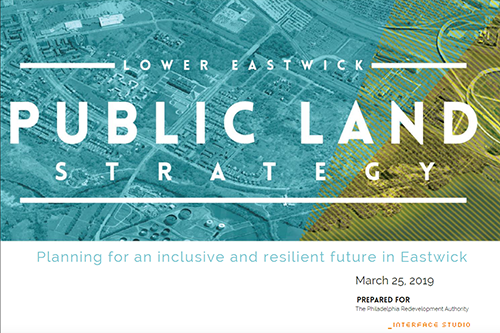 This report marks the conclusion of a two-year endeavor that had two goals:

1) empower Eastwick residents through an inclusive process to shape the future of their community; and
2) provide a framework for responsible land use decisions to build a resilient neighborhood.

The consultant team, led by Interface Studio, looked at feasibility through three lenses: what the community aspires to, what the market will bear, and what is environmentally responsible. This Strategy was produced in partnership with a Steering Committee comprised of community residents and public-sector stakeholders. This process focused as much on informing and educating as it did on engaging and empowering.

In December of 2015, an agreement was reached with the New Eastwick Corporation (NEC) to release any development rights for 134 acres of land in Eastwick. The Philadelphia Redevelopment Authority and the City committed financial compensation to NEC and agreed to carry out a planning and feasibility study to engage the community in determining the best use for the land.

PHDC’s policy is to provide services without regard to race, color, religion, sex, sexual orientation, having AIDS or being perceived to have AIDS, national origin, ancestry, familial status, physical handicap or age.